At 42, Neena George, who dropped out of Class 10, enrols as an advocate 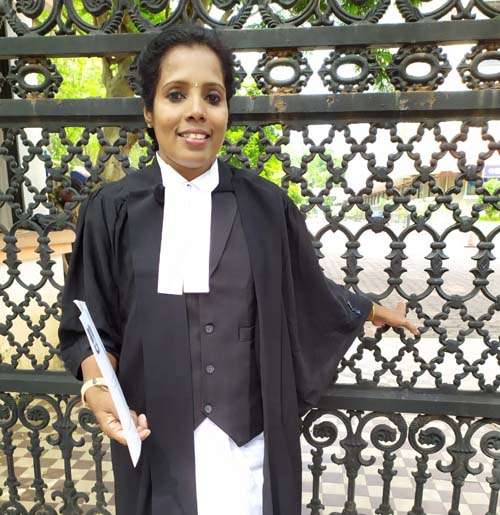 on December 15.2019, Neena’s parents, children, brothers and parents of her former husband witnessed her enrolling as an advocate at the Kerala High Court. ‘This is the result of my hard work and perseverance,’ Neena said.
Neena hails from Vaduthala in Kerala’s Ernakulam district. She dropped out of Class 10 after she had fallen in love with a man living in her neighbourhood. The relationship lasted for just four years. When she decided to call it quits unable to cope with her husband’s alcoholism and physical assaults, she became mother of two children. ‘I was ignorant and blinded by love. It was too late by the time I faced the harsh realities of life,’ she recounted.

But she was not willing to give up. She rented out a house. She also began learning typewriting in both English and Malayalam. She worked part-time for 10 years before landing a clerk’s job at High Court lawyer Advocate Denny Joseph’s office.

Nonetheless, she continued with her clerical job.

‘I would go to office early in the morning and finish routine works. Then I would rush to college. In the evening, I would go to office, do some work before going home. This has been my routine for the last five years,’ Neena said.

Neena said her children – Athira and Abhilash – were not convinced by their mother’s sudden enthusiasm for academics in the beginning. ‘I could barely spend time with them as I was racing to success in life. I didn’t care about anything else,’ she said.

Later, when the children became wise enough to understand their mother’s determination, they turned out to be her pillars of strength.

Though she was separated from her husband, Neena is still in touch with his parents. ‘I am maintaining cordial relationship with them. When I went to their home at 15, they cared me as their youngest daughter,’ Neena recalled.

Neena now exhorts single mothers to follow their dreams and achieve them. ‘You have to strive for your success while ensuring a better life for your children. Do not forget about your dreams, ambitions and passion,’ she said.