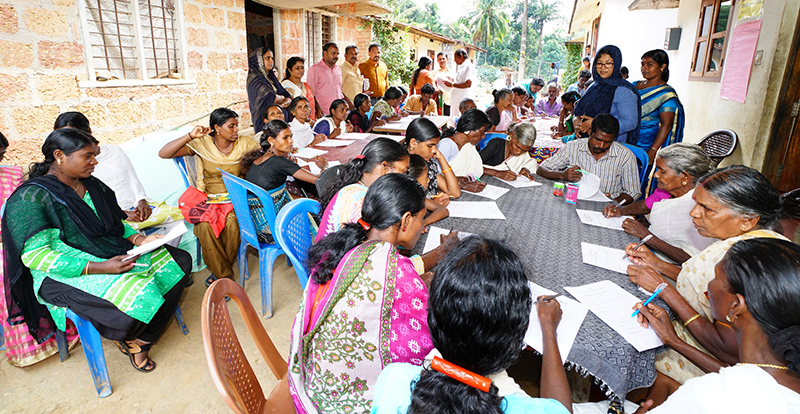 As many as 4512 illiterates, including 3598 women,in wayanad district appeared for   literacy exam from selected tribal hamlets.

The exams been conducted in 283 tribal hamlets, of the total of 2226 tribal hamlets in the district by Kerala State Literacy Mission authority.  Makka, a 90-year-old woman of Ambalakkunnu tribal hamlet in Muppainad, was the oldest neo-literate and Lakshmi,16, of the Chalakarakunnu in Padinharethara, the youngest. The highest number of candidates was in kalpatta  block with 1632, following with  sulthan batheri- 971, Panamaram- 975, Mananthavadi- 934

The mission had conducted a survey prior to identifying the hamlets and preference was given to most backward hamlets of Paniya, Kattunayakka and Adiya sects of tribespersons in the first phase of the project.

”Those who pass the examination can appear for the Class 4 equivalency examination organised by the Mission,Said P.S. Sreekala, Direcor, KSLMA. We have plans to introduce seventh, tenth and higher secondary equivalency courses gradually with the expansion of the programme to more tribal areas in the district. we have also noted positive lifestyle changes among the participants of the literacy programme. For instance, chewing of tobacco and alcohol consumption have dropped significantly, while there is a better sense of hygiene among them now said Ms.Sreekala. with elders attending the literacy programmes, they forced their children to go to school . As a result school drop out rates are drastically declined, she said. The project will be executed in other tribal hamlets too in a phased manner, she added.

Out of the 283 tribal settlements in Wayanad, an equal number of literacy instructors from among the tribal people have been recruited. KSLMA has ensured one out of the two instructors in each settlement is a tribel.

By roping in their own people to impart lieteracy, tribal people can be made confident of preserving their age-old customs and beliefs while embracing modern education. Currently, KSLMA is engaged in imparting three types of literacy programmes among the tribal population. In addition to two special literacy programmes launched for Wayanad and Attapadi in Palakkad, it also carries out a ‘samagra’ programme.

‘Samagra’ is being implementd in 100 selected tribal settlements across  the state and, as the name suggests, aims at the comprehensive developements of the tribal people in the settlements.

“When we launched the programme, we had insisted the literacy programme for tribals should be made successful by their own people. This would instill a sense of pride in them. In all the 100 settlements where Samagra was launched, we exclusively roped in tribal people as instructors”. said Sreekala.