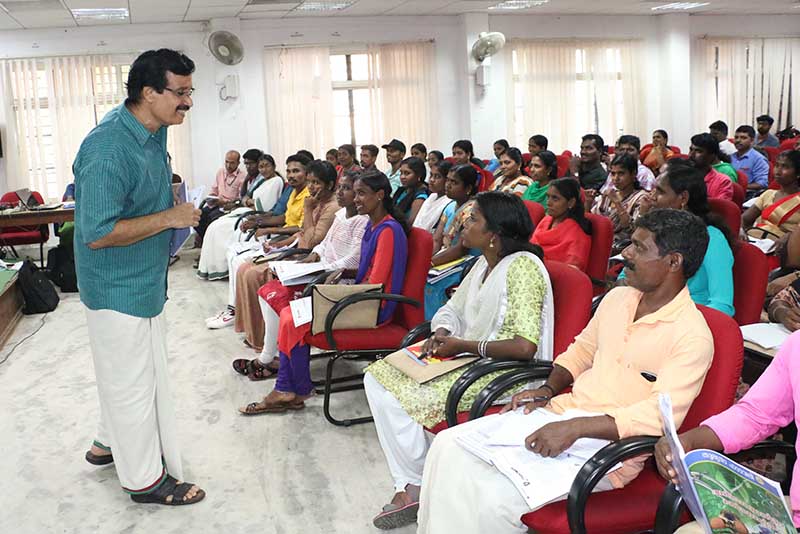 T’puram: The surprise visit of minister for education, C.Raveendranath, to the venue where training programme for instructors of Samagra scheme was being held, resulted in some light moments at PWD rest house on Monday.

Samagra is a tribal literacy equivalency scheme being implemented by the state literacy mission. The tribal instructors were being trained on textbooks for Class 1V and class V11. The minister took  over the training session and soon switched to an interactive mode.

He chose the lesson on health and asked the instructors why everybody eats food. One of the participants replied that to state hunger. To this the minister asked, ” Do  you think only stomach knows hunger, how about other organs. We eat to gain energy to keep all our organs functional,” he added. The minister left after giving some valuable lessons to the instructors.

Various subject experts led classes on other lessons. An open forum and cultural programmes were also organized as part of the training programme, it was in March 2018, that samagra Scheme was launched in 100 tribal settlements where literacy levels were low. The classes for 2,900 persons will begin on june 1. An instructor has been allotted to each tribal settlement.

The instructors are entrusted with various responsibilities like functioning of educational centres in locations where the scheme is implemented, organizing awareness sessions, etc. Instructors belonging to tribal communities with Class X qualification have been chosen for the scheme.