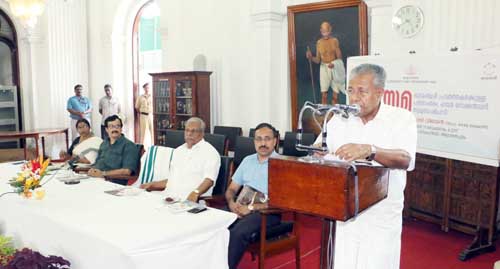 Chief Minister Pinarayi Vijayan on Tuesday inaugurated ‘Sama’, a Class 10 and higher secondary equivalency programme for Kudumbashree workers organised by the Kerala State Literacy Mission Authority. Sama would give women who had left their studies mid-way a fresh opportunity to continue their education and gain confidence, Mr. Vijayan said, launching the initiative.

It would also open the doors for them to higher education and job avenues. Through Sama, Kudumbashree would be able to contribute towards strengthening education, which was one of the visions of the State Government towards development, he said.Sama was also an initiative that allowed women to become volunteers in the area of education, according to Mr. Vijayan.

Though one lakh women were to get access to education through Sama in the first phase, in days to come all Kudumbashree members would have the qualification of higher secondary under their belt, he said, adding it would be the first time that one lakh women would together become a part of informal education.

Minister for Local Self-government A.C. Moideen presided over the function. The initiatives taken at the local self-government level for women’s empowerment would become an inspiration for Rebuild Kerala, he said.

Minister for General Education C. Ravindranath, who released the logo of Sama, said it would become the most noticed of all programmes in the State.

Sama, with the motto ‘women empowerment through education,’ will be implemented in 1,000 local self-government institutions in the State in the first phase.

Fifty women each will be included in Class 10 and higher secondary equivalency courses from each local self-government institution.

As many as one lakh women will benefit from the two courses in the 1,000 local bodies.

Kudumbashree has identified the beneficiaries and begun their registration.

It will continue till December 31. Kudumbashree will bear the expenses for the learners’ course and examination fee.

The funds for these will be expended from the women component project of the local bodies or the general purpose fund.