The man for  Tribal Literacy 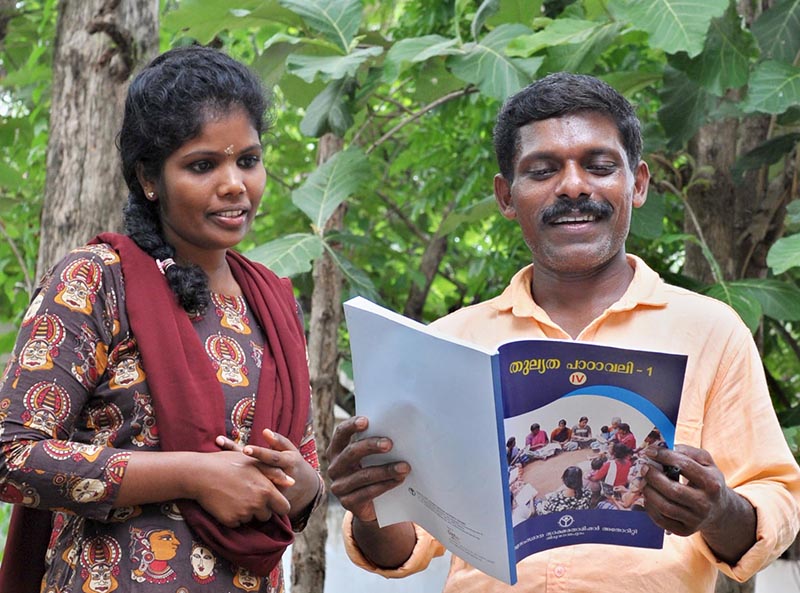 THIRUVANANTHAPURAM: The setting is an otherwise grim, desolate tribal colony of Idiyumvayal, which is desolate in terms of literacy. Forty-two-year-old Balakrishnan KK is on a quest to turn a dispirited lot of tribals into literates. In this sleepy little hamlet tucked away in Wayanad, a silent revolution is brewing, a literacy revolution. At its helm is Balakrishnan who, at the age of 32 aced the class X equivalent course of the Kerala State Literacy Mission (KLSM). And now at 42, he is the tribal chieftain spearheading a literacy campaign in the hamlet, having taken up the position of an instructor at the KSLM.

For someone who relocated to the colony 10 years ago, it was difficult to get things done in a hamlet which was ill-equipped on all fronts. This propelled him to turn to books and finish his high school. “Growing up, it was never easy to continue my education. I learned till Class X but could never clear the examination. When I relocated to this hamlet in Idiyumvayal with no facilities, I understood I needed to be literate enough to get things done in the hamlet,” says Balakrishnan. Soon he enrolled himself in the Class X equivalency course offered by KSLM.

To fight for their rights and needs, the tribals under the leadership of Balakrishnan formed an Oorukoottam (village collective). And now he is a celebrated figure in the village, donning the cap of an educator, teaching basic literacy course and the Class IV equivalency to the learners. “I teach in my own hamlet where as many as 22 learners wrote the literacy exam. Eighteen passed the exam and they have now joined the Class IV equivalency course,” says Balakrishnan.

According to the instructors, the lack of a proper study centre is the primary limitation. “We do not have any such study centre in our place. So the verandas of the houses of either of us double up as classrooms. Learners often sit in the front yard and study. And when it rains, classes have to be suspended because we do not have any roofing. If only we had a proper study centre,” his voice trails off. “The situation is indeed bad,” chips in says Fathima K, an instructor with the KSLM. “They do not have a space to learn. On one hand, we are striving to reach out to every other tribal out there but on the other, there are no facilities to conduct a class,” she adds.

Now Balakrishnan also takes the literacy classes for learners of another hamlet under the Samagra literacy scheme which attempts to bring illiterates also under the literacy ambit. He was here in the city to participate in the training programme organised by KSLM for instructors. “A significant per cent of the illiterates are present in our hamlets and getting them to attend the classes is very difficult. But it brings such joy to see them all learn and grow. If anything can empower one, it is education. I know the difference now. And that is what I am trying to do in my hamlet. The dream is to transform the hamlet into a model one and achieve cent per cent literacy,” he says.