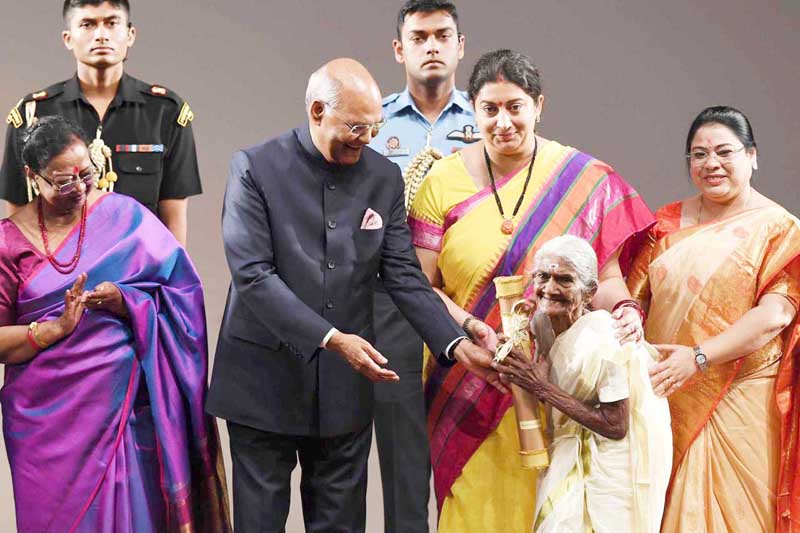 Two beloved grannies from Kerala – Karthiyayini Amma (98) and Bhageerathi Amma (105) – were awarded the Central Government’s Nari Shakti Puraskar for their contribution towards women’s empowerment on International Women’s Day (March 8). Karthyayini Amma from Alappuzha, and Bhageerathi Amma from Kollam both came into limelight after they completed their class 4 equivalency exams conducted by the Kerala Literacy Mission.
Nari Shakti Puraskar is India’s highest civilian award for recognising the achievements and contributions of women. While Karthyayini Amma went to Delhi to collect the award, Bhageerathi Amma’s health allow her to do so; her award will be sent to her home, a source from state Literacy Mission said.
President Kovind tweeted a video of Karthyayini Amma receiving the award. The petite granny walked the stage to receive the honour from President Kovind and Union Minister Smrithi Irani. They applauded her, as she received a standing ovation from the audience.
President Kovind presented the Nari Shakti Puraskar to Karthyayini Amma (98) from Alappuzha, Kerala. She appeared for writing the fourth standard equivalency course under Kerala Literacy Mission and bagged the first rank and scored 98% marks.
Karthiyayini Amma was 96 years old when she began grabbing headlines for her pursuit of education, inspired by watching her 60-year-old daughter Ammini Amma pack her bags and leave for school. Ammini Amma had then passed the Class 10 equivalency exam of the Literacy Mission. For her class 4 exams, Karthyayini Amma got 30 on 30 for her reading test, 40 on 40 for Malayalam writing and 28 on 30 for Mathematics.

Karthyayini Amma is from Muttom in Cheppad village, an hour’s drive from Alappuzha town. She began her schooling in January 2018 when the gram panchayat’s literacy mission team came to her home in Laksham Veedu Colony, which is under a government housing scheme. Karthyayani Amma had dropped out of school at the age of 12 to work at nearby temples – washing vessels and sweeping the premises. When she turned 18, she got married, and through the years became a mother of six. When the youngest was only 28 days old, her husband had passed away, leaving her to fend for the family. It was only decades later that she once again found an opportunity to restart her academic journey.

Bhageerathi Amma, the more recent achiever, passed her level 4 equivalency exams, scoring 205 out of the total 275 marks, becoming the oldest student in the country to do so. She has scored full marks for Mathematics. She told PS Sreekala, Director of the Kerala Literacy Mission, that she wants to complete class 10 equivalency exams. Bhageerathi Amma also recited a poem for Sreekala, who visited her home that day.

Prime Minister Narendra Modi recently lauded Bhageerathi Amma in his monthly radio show ‘Mann Ki Baat’, calling her an inspiration. The PM called her an inspiration, saying that despite having to drop out of school when she was less than 10 years old, she resumed her studies at 105 years, and cleared her class 4 exams with 75% marks.

Bhageerathi Amma has six children and 16 grandchildren, and lives with her fifth-generation descendants in Kollam.