Bhageerathi Amma is an inspiration to nation: Prime Minister 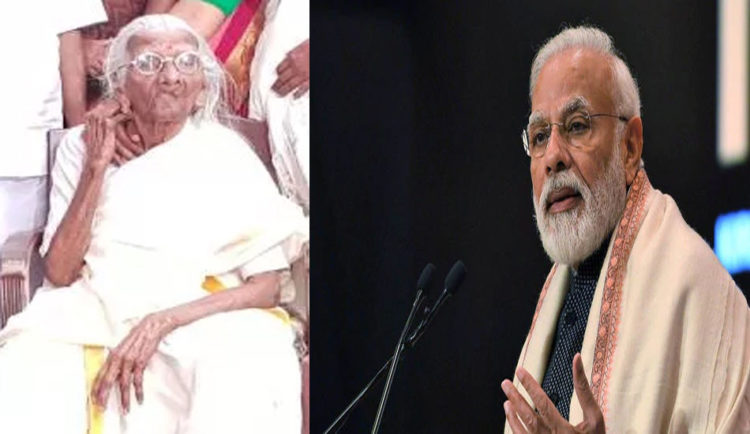 At the age of 105, Bhageerathi Amma of Thrikkaruva in Kollam once again has received probably the most precious honour of her life – Prime Minister Narendra Modi has referred to her name and offered his pranams for her great achievement of excelling in the Class IV equivalency examination.
Referring to the various achievements attained by women in various walks of life in his latest edition of ‘Mann Ki Baat’ broadcast by the All India Radio, the Prime Minister said her great efforts to study and excel in the 4th standard equivalency examination conducted by the state Literacy Mission was a real inspiration to the country.
‘You will be wondered to hear the success story of Bhageerathi Amma. If you wish to have progress in life, growth in life and to do something great, the pre-condition is that the student in you should not die. The 105-year-old Bhageerathi Amma is giving us that inspiration. You may wonder who this Bhageerathi Amma is? Bhageerathi Amma is hailing from Kollam in Kerala. She lost her mother at a tender age and later her husband also at a younger age. But she did not lose her enthusiasm to pursue her education at the age of 105,’ Modi recollected in his Mann Ki Baat broadcast on Sunday.
The PM mentioned that she got 75% marks and a hundred out of hundred in mathematics. ‘And that mother still wants to continue her education and appear for upcoming examinations too. People like Bhageerathi Amma is our country’s strength and inspiration. I specially offer my pranams to her,’ he said.
He also pointed out that our will and enthusiasm would help us tide over the challenges in hostile conditions. The PM also offered his best wishes to the students preparing for the examination.