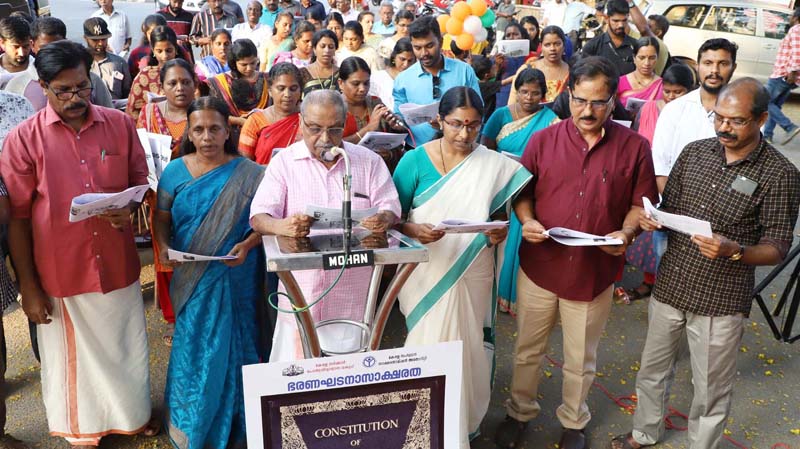 Thiruvananthapuram: scores of people from various sectors assembled in front of the district court at vanchiyoor on saturday (25.01.2020) evening to read out the preamble of the constitution. It was among the programmes conducted by Kerala State Literacy Mission Authority as part of its ‘india a Republic’ campaign.
The campaign is as part of the constitution Literacy programme of Literacy Mission to create awareness among the people registered in its schemes about their rights. Around 5 lakh people read the preamble in programmes held in 5,000 centres across the state. Politicians and cultural leaders led the programme.
Advocate Cherunniyoor Sasidharan Nair led the preamble reading at in front of the court. Development standing committee chairman of the corporation Vanchiyoor Babu and Literacy mission director P.S.Sreekala participated in the programme.
Literacy Mission is organising an extensive programme as part of the campaign.
Music programme, poetry recitation, dance and drama performances and video screening focusing on history of India and the constitution are being held in the deistrict. Arond 22 artists are performing in the cultural rally being organized at various places in the state. The cultural rally aims to spread the message that communalism can be dealt with humanism. The programmes are arranged in a creative way in which common can understand the principles of the constitution.
A lecture series and exhibition organized at Government college for women, Vazhuthacadu from January 27 to 30. Minister for education Raveendranath inaugurated the the programme.
The art pageantry organized as part of the one month campaign will conclude in the district on January 30. Minister for culture A K Balan will inaugurate th public function to be organized at Gandhi park at 5 pm.