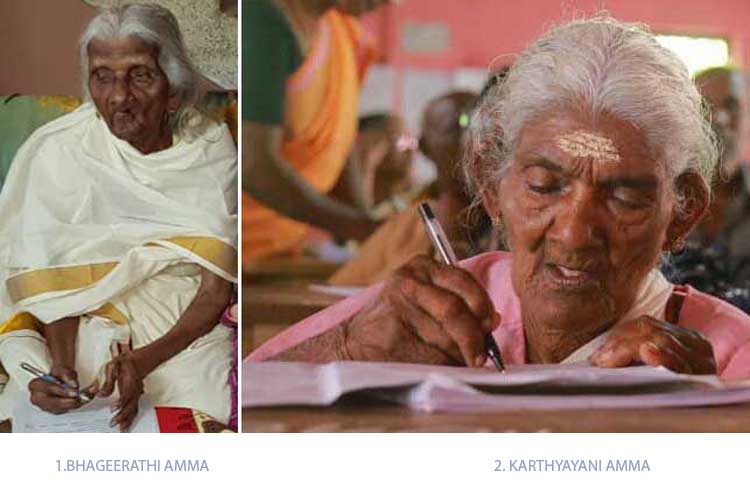 After a mention in Prime Minister Narendra Modi’s monthly Mann ki Baat programme recently, there is more recognition coming the way of 105-year-old Bhageerathi Amma of Kollam and for her fellow equivalency learner 98-year-old Karthyayani Amma of Alappuzha.

The two women have been selected for the Union government’s Nari Shakti Puraskar, a national award to recognise exceptional work for women empowerment, for the year 2019.

The award will be presented by President Ram Nath Kovind at a function organised by the Ministry of Women and Child Development on March 8.

She had lost her husband in her 30s, following which the responsibility of bringing up six children fell on her. With a sharp memory and good eyesight, she completed the course with the support of her family, particularly her 70-year-old daughter Thankamani and literacy resource persons S.N. Shirley and K.B. Vasanthakumar. The centenarian wants to clear the Class 10 equivalency course.

Karthyayani Amma wondered where she had lost two marks in the Class 4 equivalency examination as part of the literacy mission’s Aksharalaksham scheme. The nonagenarian scored 98 out of 100, bagging the first rank.

She never attended school and eked out a living as a cleaning employee in temples. She was married at 30, widowed early, and raised six children. When a literacy crew went to her colony in January 2018, Karthyayani Amma came forward to enrol for studies.

She had witnessed her 60-year-old daughter Ammini Amma pass a literacy mission course and decided she too wanted to study. For her part, Karthyayani Amma aspires to clear the Class 10 equivalency examinations and acquire computer skills. She was also selected as the Commonwealth of Learning Goodwill Ambassador.