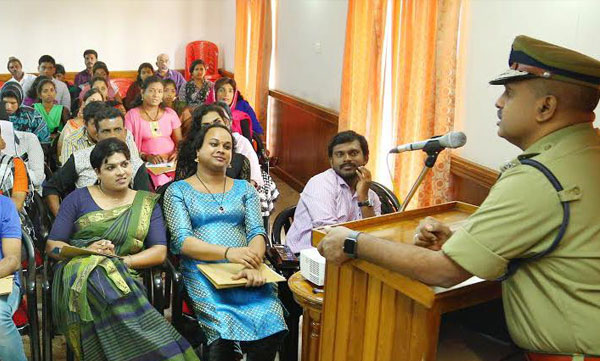 In a landmark move, KSLMA launched another literacy feat that exclusively for the well-being of transgender society. One of the disturbing trends in a literate state like Kerala is how it treats its transgenders. Transgenders in Kerala are either swept under the carpet in the family or forced to go out of homes as they are harassed in schools, colleges and in society. Transgenders are marginalised not only in society but in their homes on account of their gender. Families ostracise their children when they know they belong to a third gender.

The Literacy Mission already has its equivalency courses and other programmes. It plans to bring the TGs under this programmes, Special classes would be conducted in each district for TGs with the support of the civic authorities and continuing education centres. Apart from literacy, skill development programmes also to introduce for them. KSLMA urged active support from Scial Justice Department for successful implementation of this project. Mission also trying to partner with the Social Justice Department to set up hostels for them where they can stay and pursue their education in a safe enviornment.

Around 50 percent members of the transgender community survive on a monthly income of Rs 1,000 or less, a survey by the kerala State Literacy Mission Authority as part of the continuing education for trans, has Found.

The survey was carried out among 918 persons from the transgender community to identify those willing to enrol in various continuing education programmes launched by KSLMA.

The survey report was released by Health and Social Justice Minister K.K. Shylaja in the presence of KSLMA Director Dr.P.S. Sreekala.

The transgender population was spread equally among urban and rural areas. While 18.59 percent resided in the corporation limits, the transgenders in muncipal and panchayat areas were 32.09 perncet and 49.33 percent respectively.

Out of those surveyed, 81.3 percent were trans women (a person assigned male gender at birth but one who identified oneself as a female). While 18.25 percent were trans – men ( a person assigned female gender at birth but one who identifies oneself as a male). 0.44 percent fell in the inter-sex category (presence of both male and female reprodutive organs in the same individual).

While 20.35 percent of the transgenders were unemployed, 16.70 percent worked in the private sector. While 1.65 percent had government jobs, 5.86 percent were working in semi-government institutions.

A majority of the people who were employed had not disclosed their distinct sexual identity before society of in any official records.

Over 30 percent were engaged in some form of self-employment, the survy found.

The srvey also revealed six out of 100 transgender persons were engaged in begging and eight out of 100 in prostitution. Over four percent of the people didi not have any documents to prove their identity.

Around 73 percent had their names enrolled in a ration card. However, most families were rluctant to accept there was a transgender person in the family.

The survey found only 1.2 percent of the transgenders surveyed were unable to read or write. The number of school dropouts among transgenders increased as they progressed to higher classes, mostly due to social stigma.

While 30 percent of the transgender persons demanded special batches for continuing education, 27 percent were willing to study in common batches.

While a majority of them are interested in an education system which focuses on health, hygiene, sexual health and law, there were also respodents who wanted to pursue education in arts and sports.