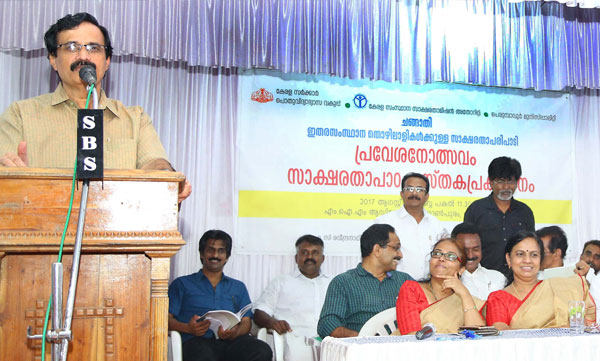 Thousands of migrant workers from the northern states initiated into the world of letters as part of an ambitious literacy progrmme ‘ Changathi ‘ be rolled out by KSLMA on Independence day. The programme which aims to teach the migrant labourers read and write Malayalam and Hindi within Four months.

The programme launched at perumbavoor in Ernakulam district, Which has the largest concentration of migrant workers in the state. A survey was conducted in 27 wards of Perumbavoor recently, and 400 beneficiaries had been identified for the education programme in the initial phase.

A grand welcome ceremony named Praveshanolsavam on the lines of the welcome ceremony held at schools on the opening day – be held on August 15 to encourage migrant workers join the literacy programme.

Though migrant workers have been playing a key role in many sectors in the state, they are still facing exclusion in society. Mission introduced this programme aiming to end this social exclusion by teaching them Malayalam ,orient them to the culture of the state. apart from introducing them to the social and cultural features of the state, and creating legal and health-related awareness.

Five hour of class a week

The Literacy Mission Authority conducts five hours of class per week as part of the programme. study centres comprising of five to 10 clusters have constituted for the purpose. Each cluster have around 15 to 20 participants. Each study centre have an instructor, who be proficient in both Hindi and Malayalam. The services of educationally qualified migrant workers and students of the Literacy Missions Higher Secondary Equivalency course be utilised for the purpose.
The study Centres arranged at schools, libraries, workplaces and even at the shelters of migrant workers.

The Study Material has been prepared keeping in mind the working conditions of migrant workers and their interaction with the society. The study material be a fluid one which take into account the feed back received from various quarters.

Titled ‘Hamari Malayalam’ (Our Malayalam), the textbook be launched by state Education Minister C Raveendranath at Perumbavoor. The book has 25 chapters dealing with various topics ranging from hygiene, health and technology to rights of workers and ethical values. The chapters would be in the format of dialogues, set in various backdrops like a bank, school, market and so on.

The book designed in such a manner that not just to teach them Malayalam but to inculcate the basic lessons of sanitation, health and values in a simplified manner.

In view of the good response received for Malayalam Literacy progrmme for migrant labourers at Perumbavur, it is set to take off across the state. The model now be expanded to one panchayat in every district.

Survey to identify the workers will begin soon. Zeroing in on instructors and other things needed for the smooth functioning of centres with public participation will be held.

The Lcoal Self government institutions where the scheme will be implemented include Kazhakuttam in Thiruvananthapuram, perinad in kollam, koyipuram in Pathanamthitta, Mannancheri in Alappuzha, Payippad in Kottayam, Karikunnam in Idukki, Chavakkad in Palakkad, Perinthalmanna in Malappuram, Narikkuni in Kozhicode, Chirakkal in Wayanad, and Manjeswaram in Kasargod.