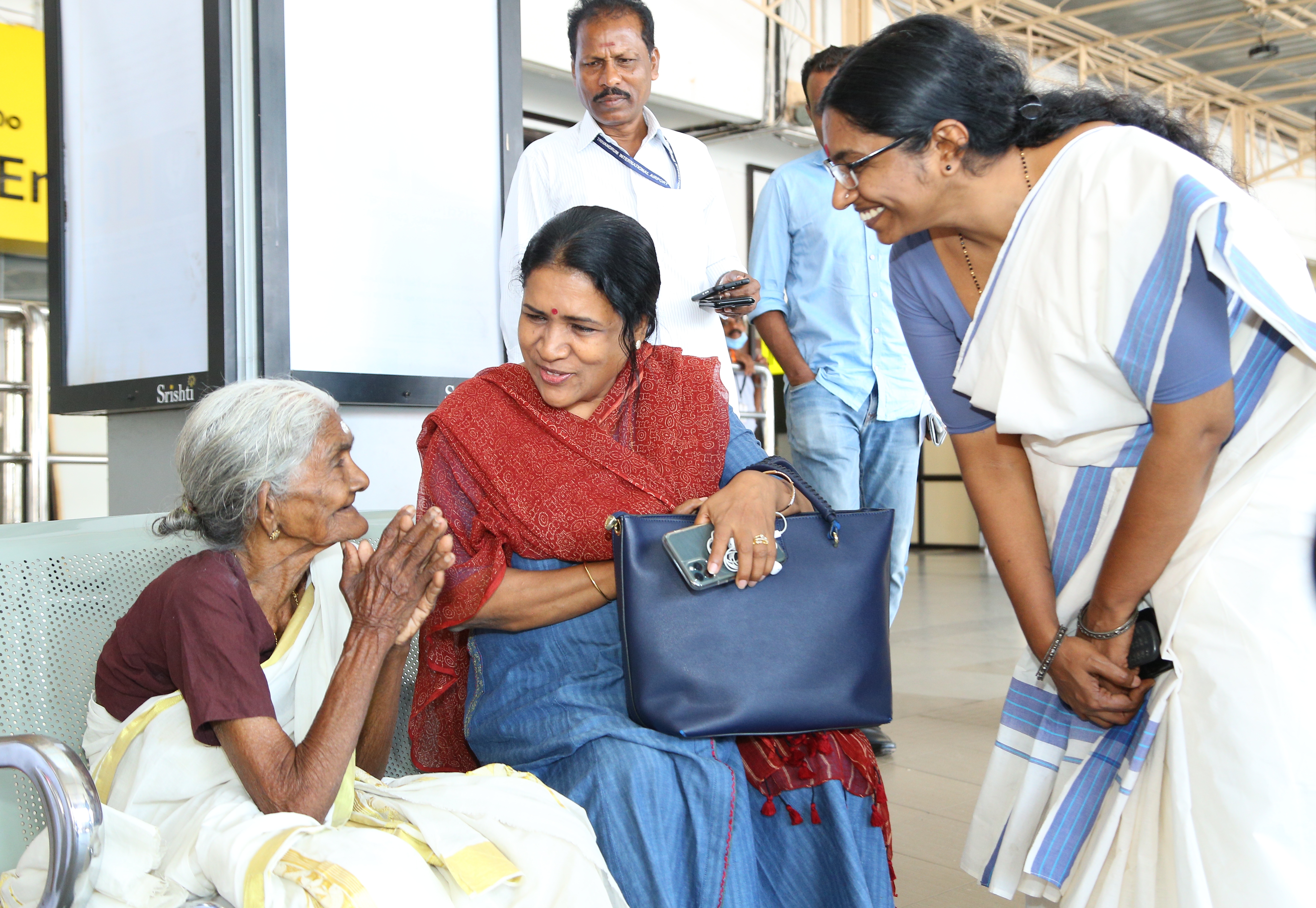 Thiruvananthapuram: Ninety- eight- year old Karthyayani Amma, who won the first rank in the saksharatha exam, has said that she would keep her word given to Kerala chief Minister Pinarayi Vijayan and clear the Class X equivalency exam.
The nonagenarian spoke about her promise to the CM on higher studies, when she had a chance meeting with Pinarayi Vijayan’s wife Kamala at the Thiruvananthapuram international airport on Saturday.
” You have won the first rank in the saksharatha exam. And now Nari Shakti Puraskar. Now, what do you want to achieve ? ” quipped the CM’s wife.
” That day I had told the CM- want to clear class X. Now Iam learning computer. When I pass class X, I would be 100 years old, ” Karthyayani Amma replied, putting a smile on Kamala’s face.
A native of Apappuzha, Karthyayani Amma reached the airport on saturday morning to catch a flight to Delhi to receive the Nari Shakti Puraskar award from the president on international Women’s Day. And the CM’s wife was on her way to Kannur when she interacted with the elderly woman at the airport.
Karthyayani Amma had won first rank in the Aksharalaksham literacy exam of the saksharatha Mission in August 2018. Whe chief Minister Pinarayi vijayan presented her the certificate, the nonagenarian told about her wish to clear class X and learn computer.
Then Education Minister C.Raveendranath visited Karthyayani Amma at her home and gifted a laptop. Karthyayani Amma recounted these events when she met the CM’s wife. State Literacy Mission Director Dr.P.S.Sreekala introduced Karthyayani Amma to Kamala at the airport.
The director urged the granny to say something to those who turned up to congradulate her. ” Don’t waste time watching television or on mobile. Study something. Will share more updates on returning home after the award ceremony”, said the elderly woman sternly, and the onlookers broke into laughter.
One of the oldest Saksharatha student in the country, Karthyayani Amma was recently made the commonwealth of learning Goodwill Ambassador. Another elderly student from Kerala, 105 year old Bhageerathi Amma of kollam had cleared the class 4 equivalency exam. Though she was also chosen for the Nari Shakti Puraskar, she could not go to Delhi due to difficulty in travelling. The central government would present the award to her at home.
Nari shakti Puraskar is the highest civilian honour given for woman in the country. This award is given for women and organisations that are working towards women empowerment